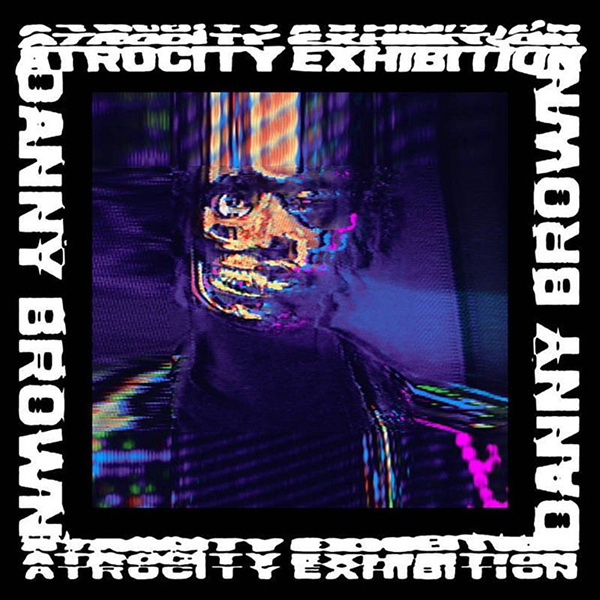 The first sound we hear on Danny Brown’s Atrocity Exhibition recalls nothing so much as it does the eerie slide guitar riff from the title sequence to the show Breaking Bad, which creator Vince Gilligan initially pitched as “a story about a man who transforms himself from Mr. Chips into Scarface.” By series end, however, what once resembled Kafkaesque metamorphosis looked more like Machiavellian self-actualization. “Downward Spiral,” the opening track off Brown’s fourth full-length, finds the Detroit rapper on a similar trajectory. As he grapples with drug-induced paranoia, drums clatter, horns blare, and synths bleat like hallucinations. Sonically, Atrocity Exhibition is miles away from the territory of The Hybrid, Brown’s 2010 debut album, and its many preceding free mixtapes. The Dilla-inspired beats have mostly fallen by the wayside; instead, the record’s production is equally indebted to the wintry electronic bluster of Brown’s new labelmates on Warp and the bleak post-punk squalor of Joy Division. Really though, the more things have changed, the more they’ve stayed the same.

To be sure, Atrocity Exhibition is Danny Brown’s most challenging LP; it’s a rap album by an artist who can spit over any beat, but who’s more interested in expanding the formal boundaries and exploring the narrative possibilities of the genre. In this way, he brings to mind filmmaker Quentin Tarantino, whose nonlinear chronologies are echoed in the scrambled order Brown recounts incidents from his life, a trend that began long before Atrocity Exhibition. It’s no wonder his career started with a hip-hop group called Rese’vor Dogs, alongside fellow Detroit-based rappers Dopehead and – not Mr. – Chip$. Brown’s distinctive vocal style, which he first used on 2010’s “The Hybrid,” also mirrors the gung-ho, live-wire intensity often found in Tarantino’s cinematic bloodbaths. With his Muppet-on-meth squawk and filmic sensibilities, Danny Brown already felt like an alien in a musical world hidebound by convention.

2011’s breakthrough album XXX continued to push limits while examining depression – Brown’s voice grew weirder and more high-strung; his anecdotes were rougher, more fragmented – but even amidst the decadence and despair, there was real hope and humor. Things get more complicated with Atrocity Exhibition, both in terms of sound and vision. On the aforementioned “Downward Spiral,” Brown – who’s sequestered in his room and dealing with the effects of a three-day coke binge – admits, “I gotta figure it out,” though he’s also in the grips of crippling self-doubt. Almost every song on here is burdened by the weight of trauma, and Brown’s various internal states reveal themselves just as much through his delivery as they do through what he’s actually saying. His lyrics border on the literary – Atrocity Exhibition’s also named after a J.G. Ballard novel – but they gain force when Brown makes them do his bidding. Or as he puts it: “Verbal couture / Parkour / With the metaphors / The flow house of horror.”

Black Milk collaborated with Brown on 2011’s Black and Brown EP, and the Detroit-based indie-rap artist contributes production to “Really Doe,” a posse cut featuring Kendrick Lamar, Earl Sweatshirt, and Ab-Soul that’s about as close as Atrocity Exhibition gets to a traditional hip-hop banger. “Really Doe” forgoes the experimentation, and for five minutes, Brown and company let loose atop a spooky, spine-tingling beat. On a record that’s this tightly wound, “Really Doe” feels like a welcome breath of fresh air – Brown shouting quick-witted one-liners, Ab-Soul deliberately meting out weed-addled revelations, Kendrick talking in riddles and Zen koans, and Earl blowing our minds with complex rhyme schemes – we could use more of.

But that would be too easy, and if anyone understands the need to pursue a singular mission, it’s Danny Brown. Fortunately, he’s joined by a compatriot who shares his penchant for breaking the rules – UK producer and frequent collaborator Paul White, whose stamp is on nine of Atrocity Exhibition’s 15 tracks. White spins a web of disorienting samples and discordant noises for Brown to rap over, from the punch-drunk brass of “Ain’t It Funny” to the disintegrating buzz of “When It Rain.” Elsewhere, Evian Christ tries his best (and fails) to throw Brown off-rhythm on “Pneumonia,” as he’s preoccupied (“licked the clit and she did the Macarena”), while The Alchemist’s lurching beats on “White Lines” prove similarly futile in slowing Brown down on his bender (“Let go the wheel of what we call self-control / Popped another roll”). Musical interventions aside, Atrocity Exhibition begs the question: is its creator celebrating the hedonistic lifestyle he depicts? Will his listeners even care?

Perhaps. Brown has long eluded reductive interpretation, not only in his work but also in his self-presentation and public image. At 35, he’s “past his prime” in a youth-obsessed industry, yet he’s only grown more fearless and taken bigger risks over the years. Even when he cleaves an album in two – as on 2013’s Old, each side devoted to one half of his personality – the divide’s not so neat. This Jekyll/Hyde, Chips/Scarface identity is more porous than split – a continuum rather than a binary – and when on “Lost” Brown states, “I’m a Linwood nigga I done traveled the world,” you know he’s not either/or – he’s both.

Still, if there’s any answers to be found to the questions posed above, it might be on “Hell for It,” the LP’s unsettled final song: “Gotta figure this shit out.” The line brings things full circle, but in a deft sleight of hand, it also manages to leave the future wide-open. Brown sounds more resolved, and he offers affirmations: “So my task / Is inspire your future with my past / I lived through that shit / So you don’t have to go through it.” In times good or bad, Brown bears witness – he figures shit out – as a service to others.

“When It Rain” was the first taste Brown gave us of Atrocity Exhibition, and as an amuse bouche, the song provided a natural point of entry, situated as it was somewhere between Old’s two halves – ribald bacchanalia and realistic diorama. Brown continued releasing advance singles that flirted with increasingly bolder statements of purpose, until it was undeniable that he would be following his bliss on the next record. With each successive album, Danny Brown has added a new chapter to his mythology, and when he does revisit familiar ground (as on the menacing “Tell Me What I Don’t Know”), it feels fresh, like you’re privy to new vantage points. His wisdom is self-evident, but you get the sense that it’s fragile, too.

That tenuous grasp on the world – paradoxically paired with a trenchant insight into its true nature – is one that Brown shares with Ian Curtis of Joy Division, who committed suicide shortly before the release of the group’s 1980 LP Closer and whose opening track supplies the title to Atrocity Exhibition – a fact not lost on the media. For a minute there, it almost seemed like Brown was no longer the star attraction of his own freak show, even though his upcoming album barely had any features. The press cycle self-corrected as soon as the first tunes became available, but then it takes a spirit like Brown’s to weather these changing tides.

Atrocity Exhibition might have borrowed from industrial and grime, and its maker may have name-checked a laundry list of left-field influences leading up to the release – Raekwon, Björk, Talking Heads, System of a Down – but one listen to the final product reveals an unmistakable alchemy. Like “Blue Sky” meth – and despite all his competing personae – Atrocity Exhibition could only be the work of one man, Danny Brown.

Danny Brown will perform at Bruiser Thanksgiving 3 in the Fountain Ballroom at Detroit Masonic Temple on Wednesday, November 23, 2016 at 8:00 p.m. Listen to Atrocity Exhibition below: