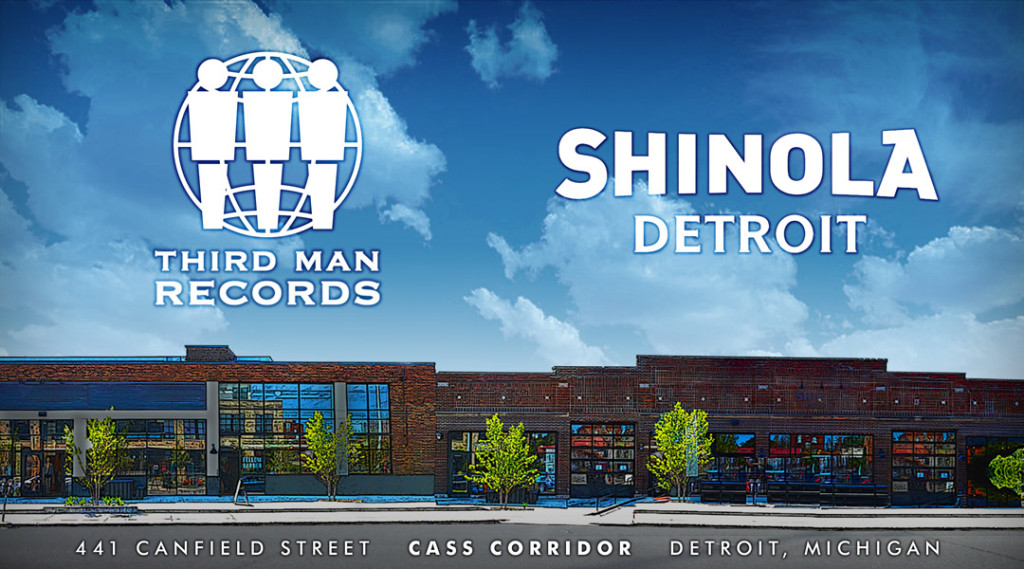 In what should be a highly auspicious announcement for Midtown Detroit, particularly following recent developments on the new arena for the Detroit Red Wings, Shinola founder Tom Kartsotis has partnered with Detroit-native Jack White to purchase the building that currently houses the Shinola Flagship store at 441 W. Canfield in Cass Corridor. This deal marks a new expansion for both the luxury goods company as well as the former White Stripe’s record label.

The deal also marks a homecoming of sorts for Third Man Records, as the imprint was originally founded in Detroit in 2001; the expansion signals the opening of their first retail store and offices outside of Nashville. The new retail space is set to be in operation by Black Friday (November 27, 2015), and a press release promises many special surprises in store.

For Shinola, the new partnership arrives on the heels of the company’s investment into another category, as it hones in on the ability to manufacture audiophile-quality speakers, turntables, and headphones. At the same time, the brand is committed to creating more manufacturing jobs in the United States.

Third Man Records has aspired for a long time to establish a presence in the Motor City, particularly in the rapidly evolving Cass Corridor, where Jack White has a great deal of history — including the first-ever White Stripes show, his high school, and in his words:

“[Cass Corridor] has always been the most inspiring area of Detroit for me as an artist and as a Detroiter. From the great visual artists like Gordon Newton to the music of the Gories, and the birth of the Detroit garage rock scene, the Corridor has nurtured Detroit’s soul and inventiveness for decades. That spirit pushes forward with Shinola’s passion and will come full circle for the artists of the Corridor that work with Third Man Records to plant a new foundation there to help keep that creative spirit alive for decades to come.”

This deal represents a return to Third Man Records’ roots as well as a new direction for its future, and the possibilities of the extra space and the partnership with Shinola are “endless and exciting.” According to Third Man Record’s Ben Blackwell, “I’m as excited as anyone. This will be the start of something magical.”