Mo Pop Festival is back, and it’s bigger than ever. For its third year, the indie rock-heavy event has moved from Freedom Hill Amphitheatre in Sterling Heights to the newly created West Riverfront Park in Downtown Detroit and expanded to two days.

In addition to the music, Mo Pop will feature local brewers, craftspeople, food trucks, and technicians, as well as fabric art installations and a hot-air balloon. The DIY spirit of Detroit is sure to lend the event a unique, local vibe that will fit in nicely with the rest of the city’s summer festivals.

Check out our guide to the artists playing this year’s festival below. For more information on Mo Pop, including tickets, please visit the official website. Detroit Music Magazine wishes everyone a safe and enjoyable time at this year’s event; check back soon for our recap of the festival! 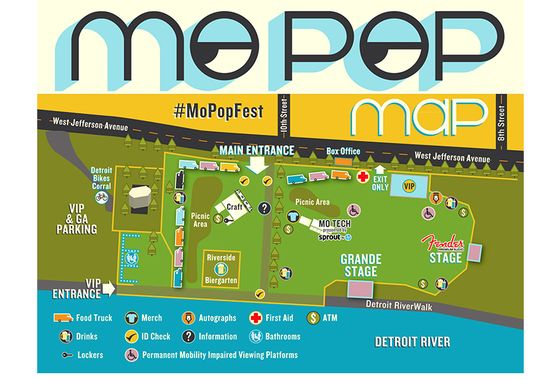 Royal Oak singer-songwriter George Morris began his career in the mid-2000s with The Satin Peaches and recently released the album We Will Go to Hell for This with his band The Gypsy Chorus.

A self-professed “product of the 90s,” Nashville quartet COIN’s sound evokes the rock & roll revival of the early aughts, with its angular guitars, detached vocals, and washes of synths.

Ex Cops is the project of Hymns’ Bryan Harding and Mins’ Amalie Bruun, and they take inspiration from the winsome world created by Sarah Records and Flying Nuns.

Natalie Prass, a Nashville-based singer-songwriter, creates soulful but sophisticated pop compositions that has earned her comparisons to everyone from Dusty Springfield to Feist.

English band Coasts add to the rich musical history of their native Bristol with their thrilling blend of alternative rock’s angst and indie pop’s whimsy.

You may know King Tuff already as Kyle Thomas, a member of Happy Birthday, Feathers, and Witch. Consider this his neo-garage outfit.

James Bay carries on the tradition of English blue-eyed soul, popularized today by other artists such as Ed Sheeran, James Blunt, and Foy Vance.

Australian indie rock band Atlas Genius first made their name in the blogosphere with the crystal-clear riffs of their song “Trojans,” which led to mainstream success.

Iron & Wine is the alias of singer-songwriter Sam Beam and his lo-fi one-man band, while Ben Bridwell is the lead singer of Americana-flavored indie group Band of Horses.

Before breaking out on his own for a solo career, Brandon Flowers was best known as the frontman of Las Vegas-based band The Killers, whose retro rock dominated alternative charts in the 2000s.

Canadian duo Chromeo craft songs that look back to the glitz and glam of the eighties in their blend of electro, pop, and funk.

Brooklyn band Dreamers have gained popularity through the success of “Wolves,” a single from their debut EP, This Album Does Not Exist.

Los Angeles-based duo In the Valley Below create noirish, electro-pop tracks that bridge the gap between Phil Collins and the Kills.

Wild Child are an Austin-based indie pop band featuring unusual instrumentation such as ukelele and trumpet.

Passion Pit, the indie electronic project of Michael Angelakos, started as a solo act but has now fused his keening falsetto with soulful synth-pop.

Jessica Hernandez & the Deltas blend the grit and energy of their native Detroit rock with everything from Motown to early surf, psych, carnival, and girl group pop.

Modest Mouse have gradually become stars of the alterna-pop world over the last two decades with their rough-hewn but radio-ready lo-fi post-rock.