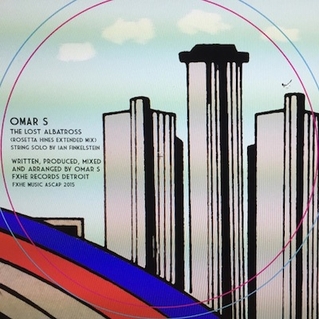 “The Lost Albatross” is our first taste of new music from the backward-looking/forward-pushing Omar-S. The producer started his career in the early 2000s by cozying right up to the minimalism of Detroit techno and adding a dash (sometimes more) of Chicago house. Omar-S has always had a gift for creating steely sonic landscapes inhabited by the mechanized, but his recent output had set aside his more austere inclinations in favor of a druggier, warmer sound with traces of trance.

As the A-side to Omar-S’ forthcoming Side Trak’x Vol. 4 EP, “The Lost Albatross” represents a return to form. The track opens with a scratchy, almost spastic drum loop before hitting us with a stark but engrossing melody that is pure Motor City. Omar S’ Afrofuturist-meets-automaton beats are clearly taken from the Belleville Three playbook, but there’s something else at work here, too. An electro-funk current roiling under the surface, as if Stone Throw’s Dâm-Funk got hired at the Jefferson North Assembly. No matter how you cut it, this track is bound to be a staple for Saturday nights and Sunday mornings alike.

Side Trak’x Vol. 4 is due out on December 18 via Omar-S’ own label, FXHE Records. Listen to “The Lost Albatross” below: