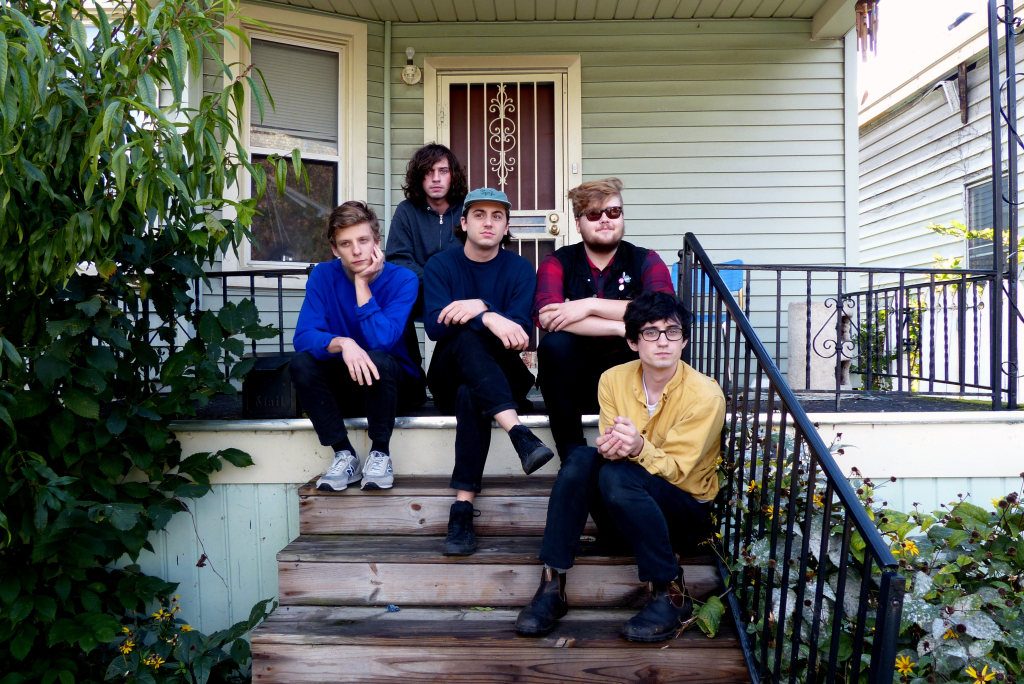 Growwing Pains’ debut “17 Songs About the Same Girl” is chock-full of raucous garage-rock burners that all seem to be on the brink of collapse.

17 Songs was released last winter on Urinal Cake Records, a label known for showcasing the best bands in the Detroit scene. But Growwing Pains aren’t stopping there, armed with a captivating live show sure to charm any rock n’ roll fan from San Francisco to Greensboro.

DMM caught up with the band, whose current lineup consists of Zak Bratto (guitar/ vocals), Adam Hunter (bass/ vocals), Josh Brooks (bass/ vocals), Jake Kmiecik (drums) and Jeff Urcheck (keyboards). At their rehearsal space in Hamtramck, the boys mused on the young, burgeoning Detroit music scene, DIY venues and their plans for the near future.

When you guys started playing together, was there a certain sound you all were aiming for?

Zak Bratto: I think at first it was just rough, basic punk stuff.

Jake Kmiecik: Yeah it was just two guitars and drums for most of the first few shows.

ZB: It started off kind of… indecipherably screamy, and we took it from there. Lately, [some of our influences] have been like Useles Eaters, Raw Prawn, a little bit of Milk Music and Wipers, stuff like that. It’s getting to be a little mellower, more lyrically-driven.

So you think you sound different than you did even a year ago?

ZB: Yeah, definitely. It’s getting more chorus-pedal-y as the days go by. [laughs]

JK: Ever time we play together, we’re getting better at it and it just morphs on its own. The addition of [keyboardist] Jeff [Urcheck] really helped a lot. It totally changes everything and solidifies a lot of stuff.

ZB: The keys really fill it out too, because the way our music works there’s a lot of empty space to work with.

Detroit’s got a wide variety of venues ranging from more official places like PJ’s and The Shelter to house shows at Trumbullplex or Elijah’s. Do you guys have a favorite place or type of venue you like to play at?

Josh Brooks: We came up playing at Elijah’s, they got their first space maybe a year after we were a band. I feel like it helped us a lot as a band, like the first ever really crazy shows we played were at Elijah’s.

JK: It helps to play a venue where all your friends are there, and they’re not afraid to get into it.

JB: Yeah and we’re still young and a lot of our friends are too. For a while we’d be like eighteen and playing at PJ’s Lager House or someplace similar, and none of our friends would want to go to some bar on a Tuesday night where their gonna be hassled for being younger and have to pay like double the price. So places [like Elijah’s] have always been great for us.

JK: It mostly just makes sense, because Detroit has so much space and you can have those DIY spaces that help bands out.

Adam Hunter: Every single venue has pros and cons to it, and I don’t think there’s one that’s absolutely perfect in Detroit yet. There are some I like more than others, and there are places that I hate playing, but not one definitive “best place”.

ZB: It helps if you can play at a place where people know they can go nuts if they want to. I see a lot of young fans at those kinds of venues, and there are also a bunch of young bands popping up in Detroit pretty often. Do you think this oversaturates that scene or helps it grow?

Jeff Urcheck: It can definitely get oversaturated a little bit, like when you want to get on a show. You’ll hit up somebody, but they’ll say “oh no sorry, this other band is playing it.” But at the same time that’s good because you get people who want to start bands and play music, and they get to test the waters and see how to do stuff. Maybe they leave that band and find other people who are already in fairly established bands who want to try something new, and they could bring about something really fucking cool.

ZB: It’s the best case scenario for testing the waters, because it’s not a super harsh judgmental environment.

Have you been touring outside of Michigan lately?

ZB: Yeah we’ve have some really great experiences touring. A couple highlights would be North Carolina, the first time we played there was great. Greensboro and the Mattress Fort in Raleigh, both were house venues which I think are good places for a band of our caliber to play on tour.

JK: [Touring is] the coolest thing ever. We are trying to tour more, hopefully in the spring.

Your new album is called “17 Songs About the Same Girl.” Was this inspired by true events?

ZB: [laughs] This is something I think we’ve been asked before, but no not really. What are most songs about? A guy and a girl. So we recorded seventeen of them and put ‘em on an album [laughs]. Figured it would be a funny name. There was something on the internet that said it was a literal title, though.

JK: Yeah and that it was broken down by song for each experience.

ZB: It makes us seem like total creeps [laughs].

JU: You can interpret the album however you want, that’s the fun part.

ZB: Except for that [literal] way.

How did you develop your relationship with Urinal Cake Records, who put out the album?

ZB: Eric, who runs Urinal Cake, has always had me take pictures of bands and design stuff. So I just became friends with him and he saw us play and offered to do an album with us if we ever wanted to put one out. So we said yeah, let’s do that. He’s always down to put stuff out, and we’re always down to record.

I was reading an interview with [Detroit band] Protomartyr and when they were asked about other local talent they mentioned that they went to the same high school as some of you guys?

JK: Yeah it’s funny to be part of that. After we found that out, it was just weird because when we were at U of D it didn’t seem like good bands were going to come out of there. It was just a sort of a pretty stifling environment for that. [laughs]

What can we expect next from Growwing Pains? Any concrete plans?

JK: We just put out a seven-inch on our friends label in Nashville, Glad Fact.

JB: A couple of seven-inches coming out soon, going to start recording a new one, do another tour.

JU: We’re trying to aim for a west coast tour next summer.