Flint Eastwood is the muse of Detroit’s Spaghetti Western soundtrack.

Following a recent tour, and a sold-out show in their hometown of Detroit, Flint Eastwood spoke with Detroit Music Magazine regarding their latest EP, wearing bolo ties and the soulful sound of Detroit’s revitalization.

I have this book here. I don’t know if you’ve seen it before, but it’s a book of all the movie poster art from around the world promoting Clint Eastwood’s western films.

Jax: God! This is amazing…. This is incredible. Where did you find this?

It was actually a Christmas present a few years ago. I’m a Spaghetti Western fan myself. I figured this would be a nice way to kick our conversation off. As far as Flint Eastwood is concerned, there has been a lot of inspiration from this type of media. Give us the story behind your connection with Spaghetti Western films. If I understand correctly, your father was a big fan Jax?

Jax: Yeah! Basically he was a huge fan of the Fistful of Dollars trilogy. That’s kind of where all of our inspiration comes from. I was personally a big fan of Lee Van Cleef as Angel Eyes. Lee Van Cleef – he’s usually my Western jam. He’s top notch. But yeah, we have a lot of inspiration from Spaghetti Western films. Specifically, from the music scores. Ennio Morricone is… a genius – with any kind of film score. Because… the films themselves were good, but they were by no means cinematic masterpieces. You must know. They were just thrown together because that was the thing to do at the time. It was kind of trendy. I feel like quality-wise they were high-quality, but I feel like the music was so much farther beyond its years than the actual films. So that’s why a lot of our earlier stuff had those samples in it. A lot from the choirs specifically. It just like – it gives you chills, man. Whenever they have like a stare-down scene and it’s chillin’, and then it’s like ‘Ohhhhhh!’ They get that really high register. Aw. Chills every time. We used to watch those at least one Sunday a month with my dad, because he loved Clint Eastwood. He thought he was the most badass dude ever. That inspiration is really just a nod to childhood.

Bryan: I feel like to be in one of these [Spaghetti Western] movies you just have to have a really great squint. [Looking at book]

Squint Eastwood. Album title? Maybe. [Laughs] As far as Flint Eastwood’s beginning, there was a Craigslist ad that was instrumental in the formation of the current lineup. Who was brought on via Craigslist?

Bryan: Both Mark and I came from responding to a Craigslist ad actually.

Bryan: We responded to the Craigslist ad to Jax and, at the time, her brother Seth. They were looking for extra band mates to play with live. We responded and became friends, and family…

Jax: Basically, we had this project called Power at the time. We needed a backing band, because we had just moved back from Los Angeles and we wanted to play out more. My brother ended up wanting to start a family and not really wanting to pursue music. It was originally us two. These guys came on, and we had already developed a friendship throughout Power, so we were like, ‘You know, we should probably continue to do this, but it just doesn’t feel right to stay as Power.’ Because it felt like such an individual thing. Flint Eastwood is more of a group thing. So, we decided to continue on as Flint Eastwood.

Power had a placement on a USA network program. They created the theme song for Covert Affairs. How did the aftermath of Power’s success affect Flint Eastwood’s formation?

Jax: We got a lot of middle-aged women loving us on YouTube. [Laughs] Moms lovin’ us. [Laughs] It was one of those songs that transfered over from Power, so it’s officially a Flint Eastwood song now, but at the time it was a Power song. We were doing a lot of licensing, me and my brother. It was a wonderful opportunity. It got us more licensing deals, which is always great. Monetarily it helped us with tours and stuff like that. Exposure-wise, it’s always nice that if we want to play a festival or something we can give them a link to a YouTube video with like 300,000 hits.

Mark: It’s a very “neat” show. Like, nothing bad ever happens to her, except maybe she gets a flat tire. [Laughs]

Jax: It’s one of those shows where she doesn’t have a gun, but like 20 people around her do and she beats them all. It’s amazing. 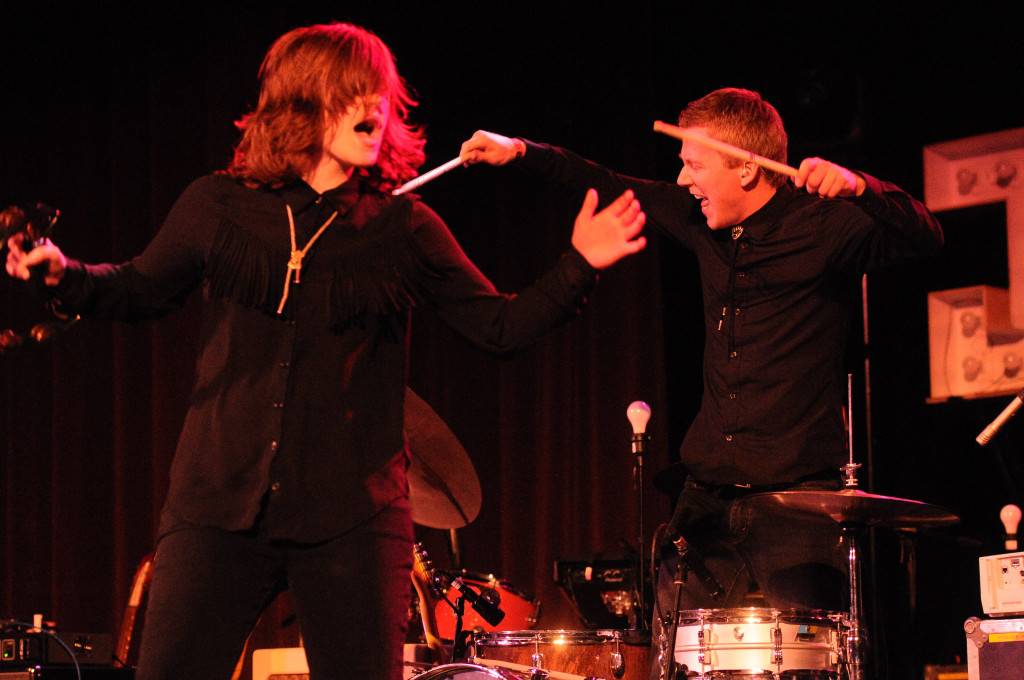 Well you just returned home from a tour, and you just had a killer sold-out show in Detroit [Ferndale]. What would you say the biggest difference is between performing in Detroit, versus performing elsewhere?

Jax: It’s really interesting. We’ve been performing as Flint Eastwood for a little over a year now. We’ve kind of intentionally tried to build these different relationships with people in different cities. Just to get to know everybody. We are big fans of building that community around the music. Within this last year, we’ve been meeting new people and learning about their lives and all that jazz. Now, whenever we go to the west side of the state, or somewhere like Grand Rapids, or Mount Pleasant, or Lansing, a lot more people are coming to shows. People are starting to catch on. It’s more than just us going up there and playing. It’s a thing where you show up and a bunch of your friends are there. It’s more of a community, rather than just us playing.  This last tour, we actually made it out to Chicago and Indiana for the first time. Indiana was really interesting. We played at a college and that was a lot of fun. In Chicago we played at a place called Quenchers [Saloon], which we had some people show up to that we weren’t expecting. We kind of just blindly go…

Bryan: And hope that people show up. [Laughs]

Jax: So when people do show up, it’s exciting for us. It’s like, ‘Cool! You like the same stuff that we like. Because we like what we’re doing. You like what we’re doing. So, therefore, we automatically have something in common. So let’s be friends!’ It’s been a journey – that’s for sure. The last year has been crazy… And god! …The January 18th show [Ferndale] – we were not expecting that. At least I wasn’t.

Jax: Yeah. We were blown away, because Detroit is kind of known for being this city where people like to stay inside in the winter. I don’t know. A lot of bands will say this: it’s really hard to break into the Detroit scene and make it to where people come to your shows. On the west side of the state, we could do it if we really focused on it, or whatever. But in Detroit, the fact that people are showing up… we are just like, so beyond appreciative. We didn’t expect that at all. That was definitely a fun night. 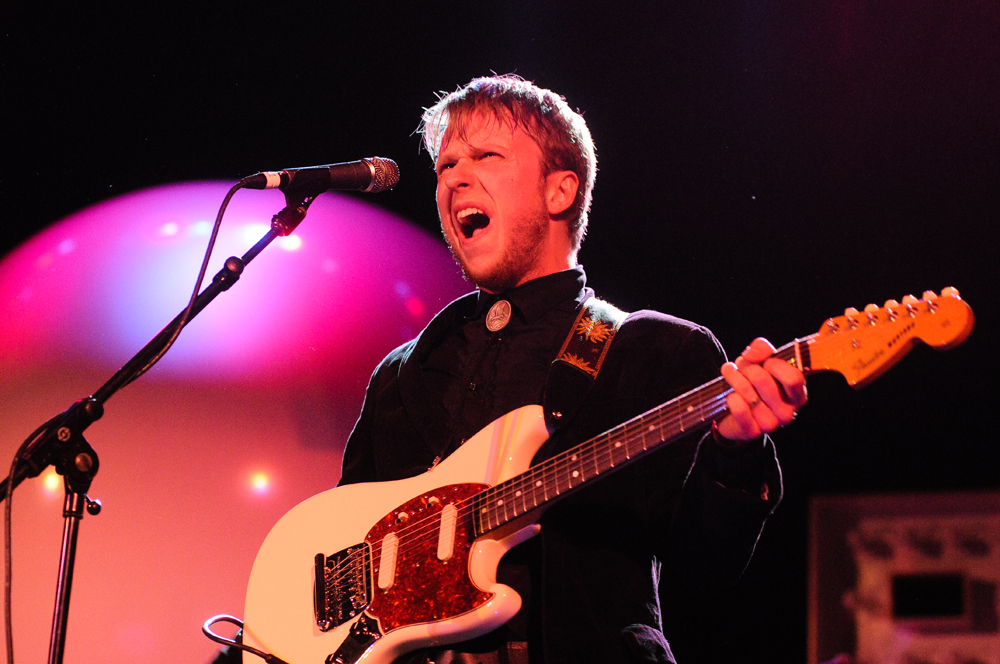 Mark: I think so.

Bryan: Everyone wants to be a part of something bigger than themselves. We just hope that when people come to our show that they’re experiencing that feeling that they’re part of a family.

Jax: We never want it to be that we’re on stage, and then there’s the audience. We don’t want that disconnect. We do everything we can to kind of break that down and make it feel more engaging.

Bryan: As a band we’ve talked about, ‘What are our goals? How do we want to present ourselves? What is our mission statement as a band?’ It’s important to us to develop this community and making people feel included. The show experience is definitely one of them.

As far as your recording… the EP. I know Seth was a part of this, and he’s not here right now, but Late Nights in Bolo Ties… What can you tell people from Detroit about bolo ties? Bryan and Jax – you have yours on right now.

Jax: They’re all the rage.

Did Macklemore bite your style at the Grammys?

Mark: I’m mad because people are going to think we copied him now. [Laughs] We started it!

Jax: Maybe. Maybe. Bolo ties basically – I’ve just always been a fan of Western gear. I started off wearing, in high school, the big… they look like bow ties with ribbons coming down. It’s a very Western thing to wear too. I used to always wear those and then it just evolved into a bolo tie. It’s one of those Western things where it can’t be interpreted as anything but Western. Unless I’m wearing it how I am now – like a necklace. Like that right there [points to Bryan] is a Western motherfucker. He takes that off, and he’s immediately something else. As soon as he puts that bolo on…

Bryan: I look more like a priest without it. [Laughs]

“Secretary,” a track from the EP, came out with a really awesome video with some help from The Right Brothers. Tell me about the making of that video. It has so much live energy. I know you have some background in video production Jax.

Jax: Basically, we wanted a video that would kind of give a background to what it’s like when we’re at a show. We’re all great friends. I feel like if Flint Eastwood would end tomorrow, we would all still be hanging out. We would all still be having a good time. So we kind of wanted to show that side. It’s basically just a bunch of show footage that we put all together. So like, The Right Brothers footage was from Pig and Whiskey in Ferndale, and DIY in Ferndale. Those are my buds. I work with them sometimes as their assistant on some shoots. Mandy Moran was also the other filmmaker there – she’s incredible. She did one of Jamaican Queens’ videos. They gave me all the footage and I edited it all together. We wanted to portray what it’s like to be at a Flint Eastwood show. We wanted to make sure there was a lot of Detroit representation. One show was in Kalamazoo. That was at Louie’s Trophy House. We were thinking like karate trophies. We were like, ‘Yeah! This will be awesome, because trophies are awesome!’ We show up, and it’s like…

Jax: Yeah! It’s just massive taxidermy. But like, there was this giant albino bison head right behind us. The rest was like wolves and bears. We were not expecting that at all. It was incredible. That’s where The Right Brothers came in.. God, they’re so freaking good.

What can we expect from Flint Eastwood in the future?

Jax: Basically, we’re just going to be touring like crazy. We’re headed out of state in February. This summer we have a little something we’re starting to work on. It’s going to be one of the bigger things that we’ve done. We’d like to include as much Detroit stuff as possible. That’s all I can say about it… for now. That will be happening in the summertime. Yeah. We’re just going to be developing that community we’ve always wanted to develop – the kind of community that changed our lives when we were young. We hope that we can do that for other people.

Listen to Late Nights in Bolo Ties below: