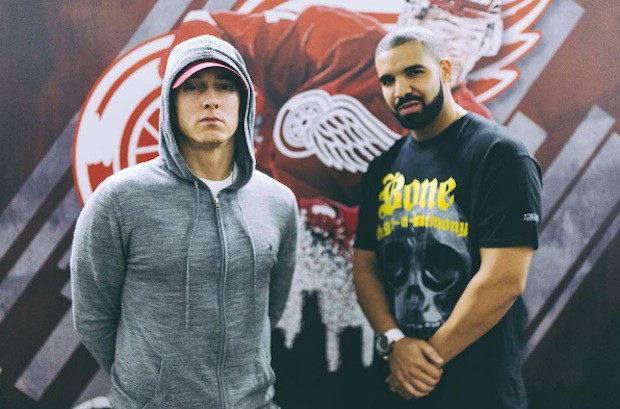 After weeks of rumors suggesting a potential feud between the rappers, Drake and Eminem appeared onstage together during Drake’s Joe Louis performance on Tuesday, to the delight of fans everywhere.

Tuesday marks the first time the 43-year-old rapper has performed in Detroit since November of 2015, when Big Sean invited him onstage along with Danny Brown, Royce 5’9″, Dej Loaf, and others to perform the crowded anthem “Detroit vs. Everybody.” During his nine-month hiatus from home, Em has only performed three times — all being South American Lollapalooza sets. (Brazil, Argentina, and Chile.)

Tuesday’s crowd roared as Eminem appeared from under the stage, rising for his verse of Drake’s “Forever.” Shortly after the track ended, the two superstars traded compliments that were met will a thunderous applause of approval.

“Detroit,” Drake commanded. “Make some noise for the greatest rapper to even get on the motherfuckin’ microphone, who goes by the name of Eminem! Legendary shit tonight!” Eminem responded, “It is an honor to share the stage with this man right here. Detroit, one more time! Make Drake feel at home!”

Drake’s Summer Sixteen Tour, featuring Future, hits Pittsburgh on Wednesday, but it’s safe to say Tuesday’s performance at “The Joe” will be tough to top. Watch fan video of Eminem’s performance below: