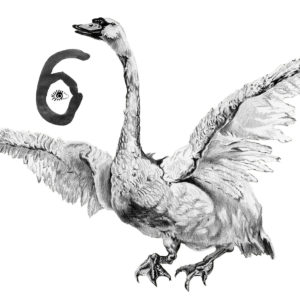 Last Halloween, Detroit native Sufjan Stevens shocked the world when he covered “Hotline Bling” and proved that even the nomadic folk singer was susceptible to the human meme that is Aubrey Drake Graham.

Something not so shocking is the amount of online fan fiction surrounding Stevens. This is a man who went from spiritual minimalist folk to bright neon experimental electronic music, and who with last year’s Carrie and Lowell cemented himself as one of the greatest songwriters of his generation. It’s only natural that he would inspire his followers to create these stories, and it’s even more unsurprising that Drake was woven into a 20-chapter series written by a duo known as Riveyonce Cuoknowles. With chapter titles like “drake and sufjan love jane austen” and “drake asks sufjan to stop abusing the advice dog meme,” you can feel the Tumblr gods smiling down on us.

Riveyonce Cuoknowles are so committed to this dreamed-up union that they birthed Six Swans, a mashup album for the new indie kids. It features different tracks from all over Drake and Stevens’ catalogs and includes contributions from a handful of unknown producers. You can stream the album below (available for free download) and read a note from the fanfic duo on their Bandcamp page.