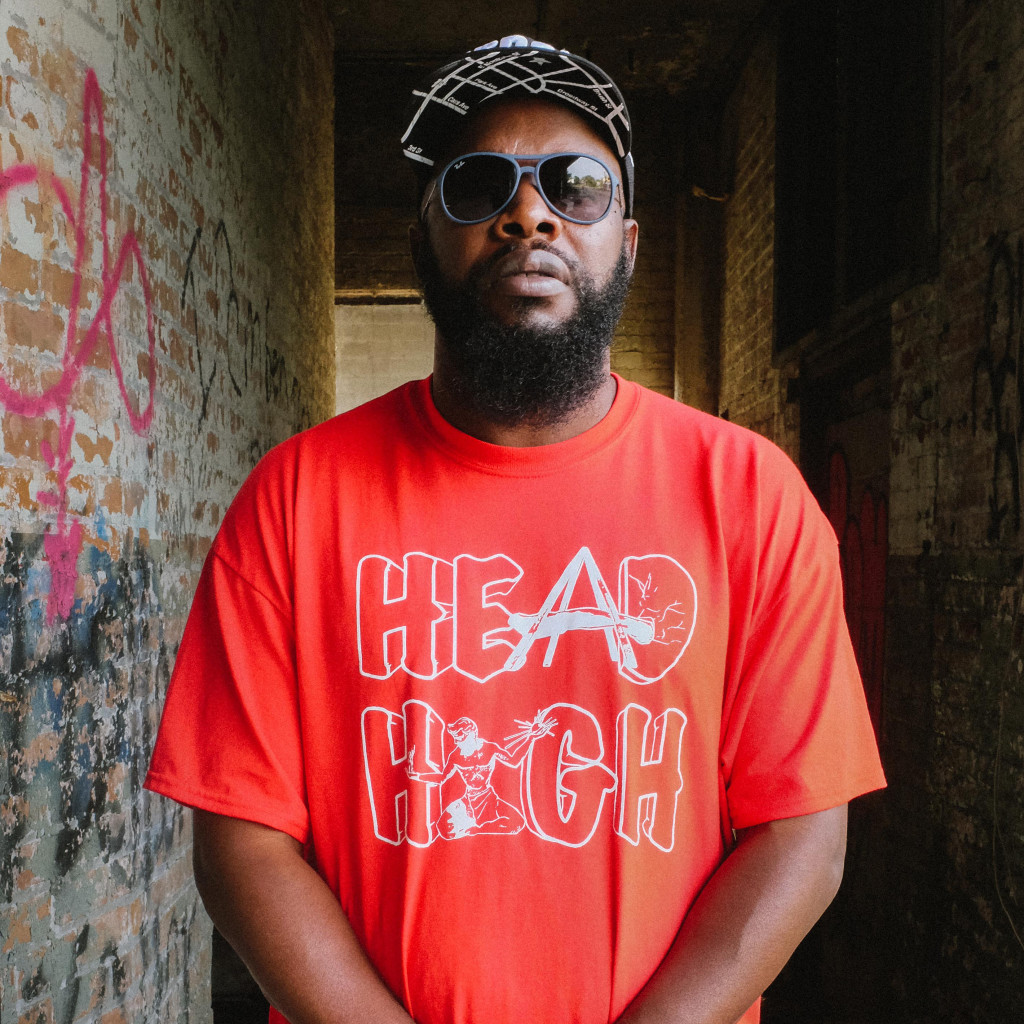 His name holds serious weight in the Motor City and is recognized far beyond its 8 Mile border. If you’re reading this, it’s too late — Guilty is a staple of Detroit hip-hop.

Guilty’s legacy can be traced back to the time of Slum Village, Eminem (whom he still calls “Marshall”), Royce da 5’9″, D12, Obie Trice, Proof, Phat Kat, and countless others who have shaped the landscape of Detroit’s music culture. His hard-hitting and brash sense of truth attracted the attention of many members on the Stones Throw Records roster, but ultimately it was J Dilla himself who brought Guilty aboard the California-based collective with the now-infamous track “Strapped” (from Jaylib’s Champion Sound, 2003).

Since those days, Guilty continued his music hustle to create acts such as Random Axe, which featured Detroit’s own super-producer Black Milk and the late rapper Sean Price, as well as collaborations with fellow Stones Throw artists Madlib and Oh No. After a five-year hiatus, Guilty is back with a new album via Stones Throw, appropriately titled Detroit’s Son.

Not only does the project celebrate Guilty’s hometown, it’s powered by the energy of Detroit’s thriving reinvention. Detroit’s Son represents Guilty’s return to Stones Throw, his affection for the city he has helped to define, and the wisdom that comes with mastering your craft. 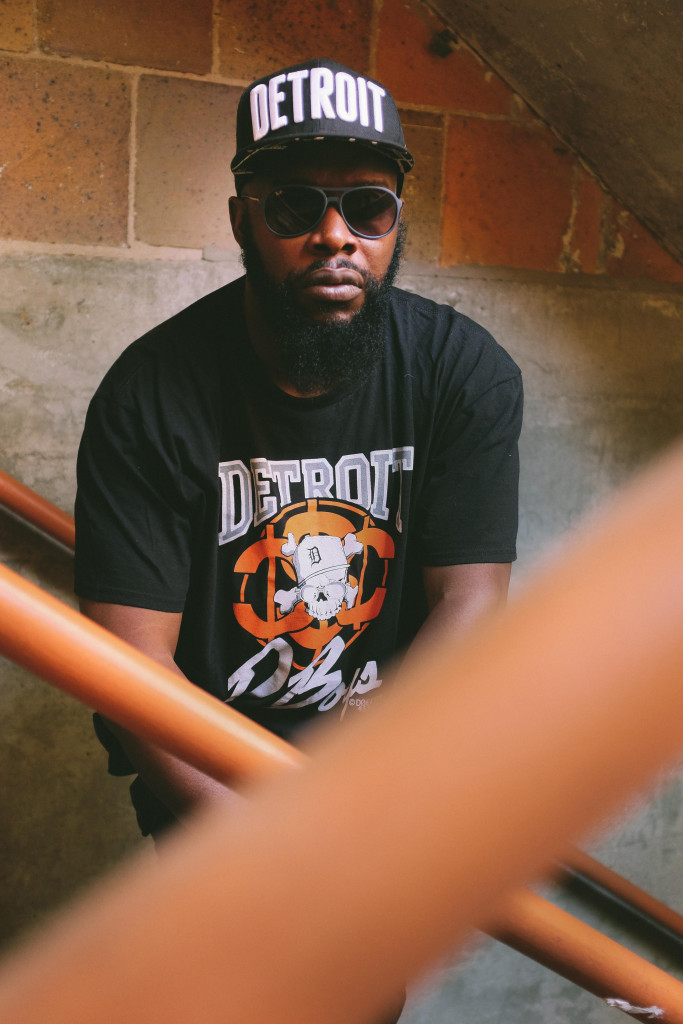 You are a legend in your own right, but you are a Detroit legend. How has this city helped to shape you as an artist, if it has at all? How has it changed? Give us your insight.

I think it’s just rich in talent. You know, with Detroit being a blue-collar city, you kind of have to get your hands dirty around here to make a living. But what the city once was, as Motown, it just shows you that Detroit was probably the best city in the world as far as music. And then, you know… Motown left. They took Motown and booked to California. It feels like we’re still kind of picking up the pieces from those days. Like, people still fly here from all across the world to go visit Hitsville.

That helps us put it in perspective that no matter how good you’re doing or how good you have it, nothing is really promised or guaranteed. I think the mentality that nothing is really guaranteed helps the artists not take anything for granted. That’s why I might hear an Elzhi record tomorrow, and he sounds as hungry as he did when I first heard him. We’re just trained to not take any of this for granted. No matter how good you’re doing or how bad you’re doing. I don’t put much stock in my bad times or my good times. I know that it can change with the wind.

But my generation didn’t really have the major labels here. You can’t just walk in to a studio and walk out with a deal like in New York, or L.A., or Atlanta. We didn’t really have those resources. I think we were able to internalize our struggle. Whoever your favorite Detroit artist is, I would like to think you can hear some struggle. You know, I think that breeds character.

There seems to be a newfound interest, financially, in the city. Things are happening, at least in the Downtown area. Do you think those resources in New York and Atlanta, such as studios and record labels, will be something we can nurture and keep here in Detroit? Do you think music is going to play a part in all of this?

Oh, yeah. I think we can. But it’s gonna take some sacrifice. You know, sometimes when you dedicate your whole movement to change, you lose a lot of history between all that. You know what I’m saying? They tear something down; they build something. Eventually, as the years go, people forget what was once there. I still think we have a bright future ahead of us. Who knows what they will do when we get this city a complete makeover. But I still about the heyday from my father and my mother, in the ’50s, when Detroit was really up there. I don’t know if we’ll get back to the same capacity, but what I do know is that we are definitely on our way back up. The city is super rich in talent.

As far as the lack of resources… that was the time of pre-Internet. All you had was those labels. Now, you can record an album in your living room. You can mix your album in your living room. You can send it to a label via email. You can get bills like that now. So, I think the playing field is level. Major labels may not be here with there foundation, for you to walk in a get a deal, but they are definitely looking at the city. They’re interested in the city. They study the city.

But as long as the artists know their self-worth, rather than what someone is telling them what they’re worth… you know. Hold out. Hold out until you at least get close to what you think your self-worth is. Back then, if a record label told me they had a contract for me, a record deal, I would almost jump at it. Because I really didn’t have options. Now, with people blowing up from home, I think the playing field is kind of level, but only for those with a strategy. Some people think talent is a strategy, but you have to have a strategy. People that are not as talented get signed everyday. 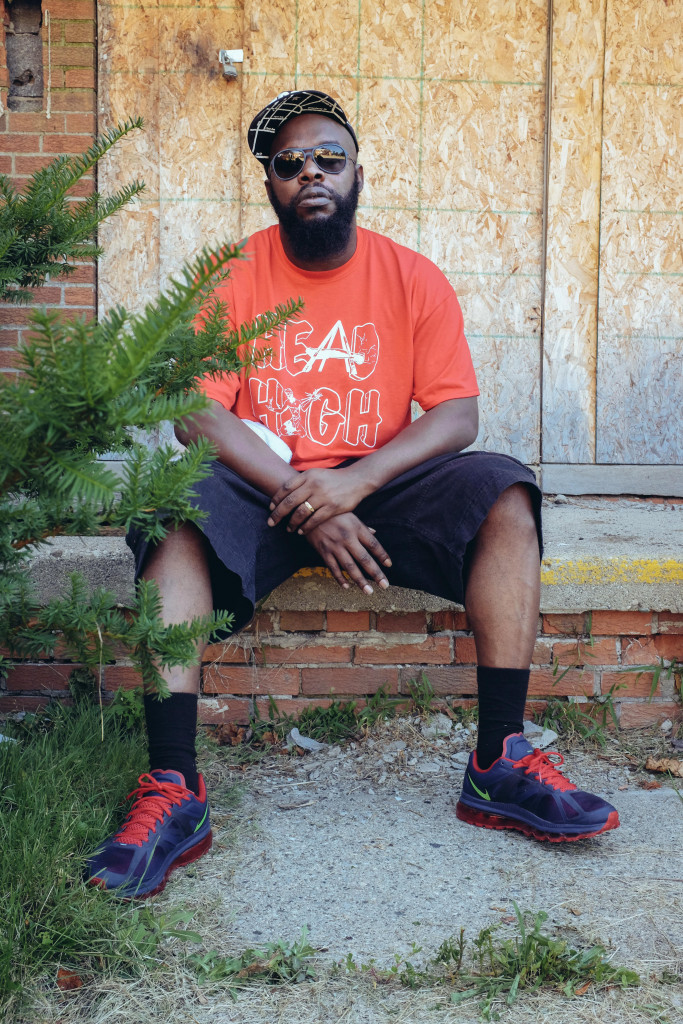 So was it strategy that helped you sign to Stones Throw Records, was it talent, or something else? How did you become involved with this extremely interesting group of people?

Actually, when J Dilla and Malib came out with their project Jaylib, Stones Throw came out to the Detroit Electronic Music Festival. All the guys: Peanut Butter Wolf, J Rocc, Madlib… you know that was my opportunity to be around them. Me and J Dilla had a song called “Strapped” on the Jaylib project and I performed that there with them. That was my first time really being around the other guys, but I actually rocked the show. Obviously Peanut Butter Wolf was impressed, because later on that night Dilla called me after a show – they were still doing their run on tour – he was sayin’ that Peanut Butter Wolf wanted to sign me. They said they wanted to take care of it right after they got off tour. So I actually got to connect with them when those guys were able to come into the city. I want to say that was like… wow… [whew]… ’05. ’04 maybe. Something like that. But thats how I was able to meet those guys. Kind of like how I met Dilla. I was just in the right place at the right time. It just happened that quick, even though it didn’t happen that quick. You know, Dilla ended up passing before I actually got that record deal with Stones Throw… but we got it into play while he was still alive and that meant a lot to me. It meant a lot to me that he was the person who was able to relay that message to me, too. That’s a moment I’ll never forget.

Timing is everything, right?

So, fast forward. We’ve heard two new singles from you via Stones Throw: “Vanguard Organization” and the very timely track “Animal.” That track touches on some animal’s rights, some human’s rights… what was the thought process behind that record?

You know, I’ll tell you something crazy… It’s funny that you call that “timely,” because it was timely. That song is like… two-years-old? At least. [Laughs]

So these are throwaway cuts. “Vanguard Organization,” I got another one coming out and then, lastly, “Animal.” Those songs are basically songs that didn’t make it on the new album. We were trying to figure out strategically how to put the record out… and I know it sounds strictly coincidental, but at the time I wrote it police was killing my people, and at the time we dropped it – it’s still current. It’s strictly coincidence that… what’s his name? Cecil the lion? They think it was just riding out for him. More than 20-year-old kids getting killed in Cleveland. They were fighting for his rights rather than that. And, you know, it just dropped. It’s just current. It’s always gonna be current, at least it seems like it through my eyes. Coming up in Detroit, I always dealt with cops who weren’t as welcoming when they greeted us. They treated us like criminals before they even determined what we were doing, or if what we were doing was even wrong. So it’s relevant to my life – period. I’m just happy that with social media, and Twitter, and camera phones, people are actually able to get a glimpse into our reality. What we really live.

But I do have another socially conscious record on the album called “The Time is Now,” and that’s even more serious than the “Animal” joint. You know what I’m saying? It’s real dark. It’s really on some revolutionary type of shit. You know, I just choose to address that. I’m always going to choose to address that in my music. I’m just happy people are rockin’ with it – that’s all.

So we’ve got that new album Detroit’s Son coming September 11.

By early September, all the songs off my album will probably be heard. But in late August the early release will be for everyone who’s a member of Stones Throw. You know, everybody who’s a part of that will get the record early. It’s on the way though. You’d better believe it. Produced by Katalyst.

Any murmurings regarding OJ Simpson II?

Well, I’ve been talking to Madlib and Egon and we’re starting to get the wheels turning on that. I’m just waiting on him to send that first batch of beats, but he’s on the road. I think he’s traveling with Freddie Gibbs and some other things. I’m still in patient-mode on that. But me, Sean Price and Black Milk started working on Random Axe II. I went to the studio and laid my first wave of vocals. I’m going to go back next week and hopefully knock out a couple more. I’m almost positive that Random Axe will come before OJ Simpson. Either way, I’ve got a strong output. My fans will be hearing current music. [Laughs] Busy is good.

I just shot a video for a track off the record called “The D”… the D, as in Detroit. It’s kind of like a tribute to the city. I know I’ve probably done that a few times already, but I just can’t get enough of it, man. I’m always gonna represent where I’m from. Stay on the look out. 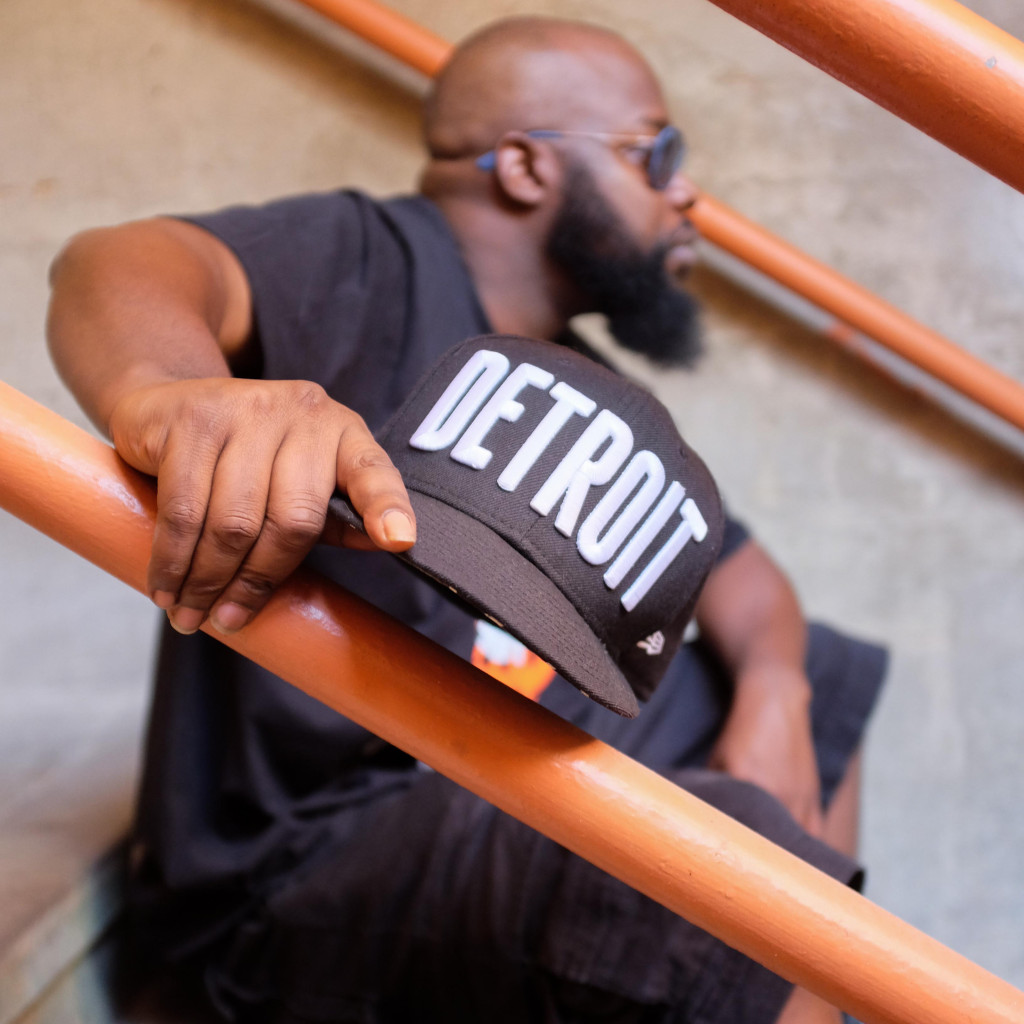 (Editor’s Note: Shortly after this interview, the hip-hop world was shocked by the death of Random Axe member Sean Price. DMM would like to offer its condolences to the Price family.)